I was driving on Stevens Canyon Road in Cupertino last week when an unusual sight caught my eye. I was already past the white bicycle when I decided to turn around and take a closer look. What I found surprised me and offered me a glimpse at a new kind of monument.

The item before me was a bicycle painted a ghostly white, locked and placed permanently on display. Two plaques told the story of the two riders who died at that stretch of highway but not much else. I had to go the internet to find out more.

Matt Peterson and Kristy Gough died in March, 2008 on Stevens Canyon Road when struck by a Sheriff’s patrol car. The driver had fallen asleep at the wheel and veered into a pack of bicyclists, killing two and injuring one. Both of the victims were avid cyclists and Kristy Gough was a champion triathlete, and Olympic hopeful. Their deaths shocked and stunned the tight-knit community. The City Council of Cupertino approved the ghost bike memorial, installed in late 2008.

The power of the ghost bike is in its stark simplicity. It reminds us of the pain of losing a loved one, especially so suddenly and so incomprehensibly. There are now over 600 ghost bikes in over 200 locations throughout the world, each one speaking to a painful loss for a family and a community. The ghost bike in Cupertino is located on Stevens Canyon Road, just east of Stevens Creek County Park. 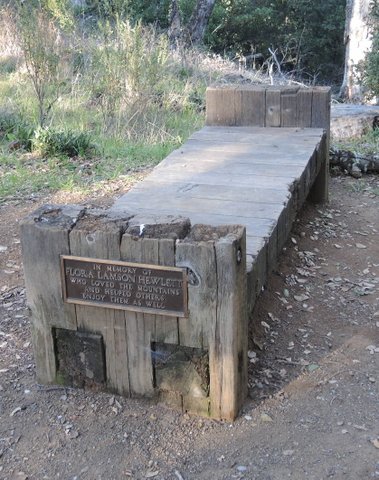