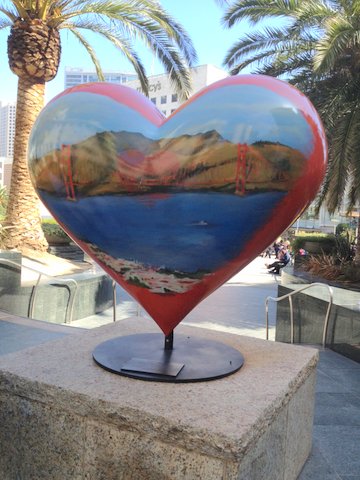 What better image is there for a tour guide than a “Heart”?  A tour guide shares what he “loves” about his city or site with others, and they, in turn, gain some love for the area themselves.

Hearts are a particularly apt image for a San Francisco tour guide. The city prides itself on its open-heartedness, and encourages you to “leave your heart” when you visit. There are also a profusion of Fiberglass hearts dotting the city and its suburbs.

Perhaps you have encountered the San Francisco Hearts project.
15 years ago, the city of Chicago inaugurated a series of Fiberglass cows, called Cows on Parade, throughout the city. Each sculpture was a uniform size and shape, but painted by an artist in a unique way. Chicago had taken this idea from the city of Zurich, and other cities in the US soon followed suit with their own Cow Parade or some other animal series that represented their city.

In 2004 San Francisco inaugurated its own version of this public art spectacle with a series of 5-foot high, 400-lb. Hearts, showcased throughout the city. That first year there were 131 hearts, all uniquely painted. Later these hearts were auctioned off to benefit the SF General Hospital Foundation. Since then (with the exception of 2005) “Hearts in San Francisco” has become an annual event, with artists vying for the privilege of creating a heart. This year’s auction, held on February 13, raised a record $1.7 million.

Where do all these hearts go?  Many of the hearts that have been auctioned off remain in the city and its environs. Google maps shows where over 70 of these hearts are currently located– in museums, corporations, and private homes. Today you can see four new hearts on display in Union Square, one on each corner. Three of these hearts will eventually be replaced, but the heart that sits at Powell and Post, designed by Tony Bennett, remains a fixture at that corner.

A Heart in the People’s Park, Berkeley